Report on the Club Activities

A student’s social life at college is as important as their academic life. They both complement each other to develop a student’s well-rounded personality. During club activities students’ get a chance to build their skillset, demonstrate time management, develop a sense of commitment and responsibility, make new friends, new networking opportunities and build self-confidence.

During the college hours on 25 August’18, students enthusiastically took part in the following club activities:

The event was coordinated by Student Coordinator-Ms Anushri [II Year BCom Á’ Section] under the guidance of Prof Meera Krishnan, Faculty Coordinator-Literary Club. 41 students took part in the club activity. The event was conducted in Room 106 from 9:30 am to 12:50 pm.

The event was conducted as follows: The name of the participating student was called out by Ms Anushri according to the registration number. The student had to come to the dais. He/she was shown a thought-provoking contemporary image. After briefly looking at the image displayed, the student had to choose a language of his/her choice-English/Hindi/ Kannada and speak impromptu for one minute without break.

‘A picture is worth 1,000 words’ and hence the objective of this activity was to improve student’s physical and mental performance.

The event was coordinated by the IT Faculty Coordinator -Prof Chaitanya and she was assisted by Student Coordinator Mr Gagan [II Year BCA]. The venue was the Computer Lab. The timings were from 9: 30 am to 12:50 pm.

60 students took part in the competition. In the first round the participants had to type out content in the given time. Only those students who had a good typing speed and typed the paragraph without errors made it to the next round.

Twelve students got selected to contest in Round two. Once again, a paragraph was read out loud. This time in addition to the typing speed, errorless typing, students were expected to format the paragraph. The event was judged by Prof Chaitanya.

The rules of the event were as follows:

Students had to make teams wherein the minimum number was two and maximum was four. They had to bring the required stationery and pictures required for making the collage. The collage had to be made in the presence of the coordinators.

5 teams were formed with four students each.1 ½ hours were given in the forenoon to make the collage. The teams had to make a presentation in front of the judges Prof Arun [ex-faculty of DSBA and expert on the topic] and Prof Lakshmikantha for 10 minutes and further five minutes were allotted for question and answer session. They were judged on theme, presentation and the way they handled the questions.

After a gruelling session the following were declared winners:

The event was coordinated by Prof Shrithi -Faculty Coordinator, HR Club and Student Coordinator -Pooja D N [II Year BBA]. The event was held in Room 109 A from 9:30 am to 12: 50 pm.

32 students took part in the event. Eight teams comprising of four students each formed part of a team. Three rounds were conducted.

The first round was Group Discussion. Some topics were general and some related to HR. Three teams got eliminated after this round. The second round was activity-based round. The activity conducted required the students to showcase their team building skills. Five teams got eliminated after this round. Case study was given to the three teams that qualified for the final round.

Topic: MIME on Eco friendly products [Save the Environment]

The event was coordinated by Prof Roopashree-Faculty coordinator and Ms B S Sharvani [III Year BCom]. The event was held in Room G-07 A from 11:30 am to 1:30 pm.

It was a team event with a maximum of six members in a team. Students had to Mime – acting out a story using expressions but without use of speech. A maximum time of five minutes were given wherein participants had to advertise a product which was eco-friendly with the help of their acting skills. They could use props as well as music. 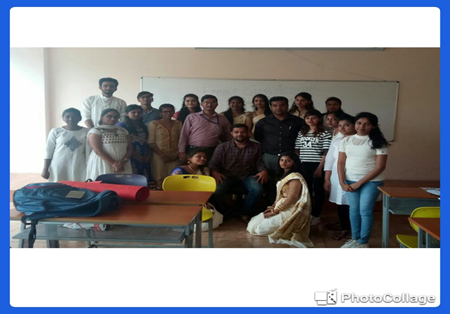